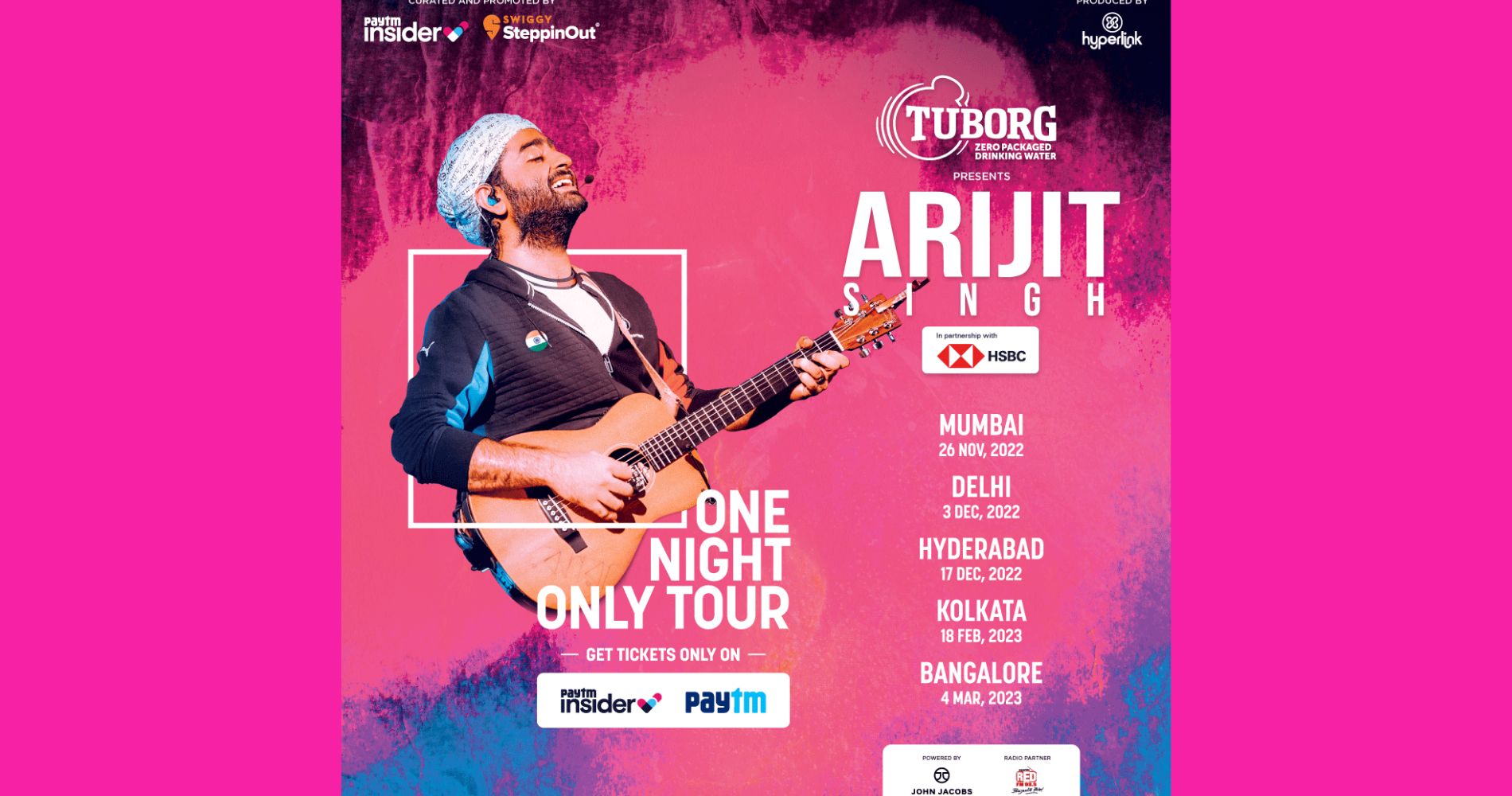 If there is a Bollywood singer who has mastered the art of versatility,it is none other than Arijit Singh.

One of the country’s biggest ace music artists, and the god of playback singing, Arijit – who has established himself as a singer of heartbreaking romantic ballads - is on his ‘One night only - India Tour’  presented by Tuborg zero packaged drinking water, powered by John Jacobs from 26th November 2022.

This multi-city tour will kick-start with its first show in Mumbai and will be brought to Delhi, Hyderabad, Bengaluru and Kolkata by leading entertainment platform Paytm Insider & Swiggy SteppinOut along with their production partner Hyperlink Brand Solutions.

This will be Arijit's first India tour in 3 years and the event will be a One Night Only premium experience for his fans with a majorly seated concert format and F&B experiences.

Arijit Singh is a universally recognised Bollywood artist whose dexterity extends to being a singer, composer, music producer and an extremely talented live performer.Having excelled at adaptability, his voice can strike a chord with you with his soothing numbers, and can also get you grooving to a party track.

He shot to fame with “Tum  Hi Ho” from Aashiqui 2 and has received much praise for his songs “Channa Mereya”, “Phir Le Aya Dil”, “Humari Adhuri Kahaani”, “Duaa”, “Kabira” that every Bollywood fan will have on their playlist. Having one song in almost every film, he has climbed the ladder to fame by even having concerts worldwide. Arijit received the National Award for Best Male Playback Singer for the song “Binte  Dil” from Sanjay Leela’s Padmaavat.

Starting his own record label in 2020, Oriyon Music, he continues to awe his listeners through ever-evolving music style and vocal skills and will keep the music going.

Now, by bringing forth this One Night Only Tour experience, the sensational and the most sought-after singer will be back on stage to perform his hit tracks and fan-favourites. Along with Arijit’s magical and soulful performance, the tour promises an exhilaratingly spectacular sonic experience for all his fans that will surely leave them with fond memories.

Varun Khare, Business Head, Live Entertainment - IPs & Partnerships at Paytm Insider said, “Arijit is one of the most talented  singers of this generation and his intense voice and profound conditioned notes  have secured him a huge number of fans cutting across ages.

This one being Arijit’s first India Tour in 3 years, we have gone the extra mile to ensure that his fans have the best time at the concert and are able to share that unfathomable deep connection that is perhaps only possible during live performances - making  for a magnificent and fulfilling experience.”

Safdhar Adoor, Director  at Swiggy SteppinOut said,“Swiggy SteppinOut is super excited to bring Arijit Singh live in concert after 3 long years! It has been a long stint and we're super pumped to be able to give our audiences and his extraordinary fanbase this opportunity to see him perform live.  We're always looking for ways to keep our audiences engaged & share that inevitable deep connection with their favorite artists that's perhaps only felt during live concerts and there's no one better than Arijit Singh to do just that! We are always pushing to bring India's top talent under our umbrella and this association has been on our minds for a long time now.”

V.G. Jairam, Founder at Hyperlink Brand Solutions said, "Hyperlink is thrilled to be working with Paytm Insider and Swiggy SteppinOut to produce the post-pandemic comeback concert of one of India's most recognisable playback singers. Since Arijit has progressively gained a place in all of our hearts, we have carefully chosen an experience for his fans across India that is befitting of our beloved musical voice. Since its beginning, Hyperlink has been a leader in innovative live events, and we are excited to present to the nation what we think will be one of the best live Bollywood musical tours of the year!"

The India tour will cover the following cities starting with:- 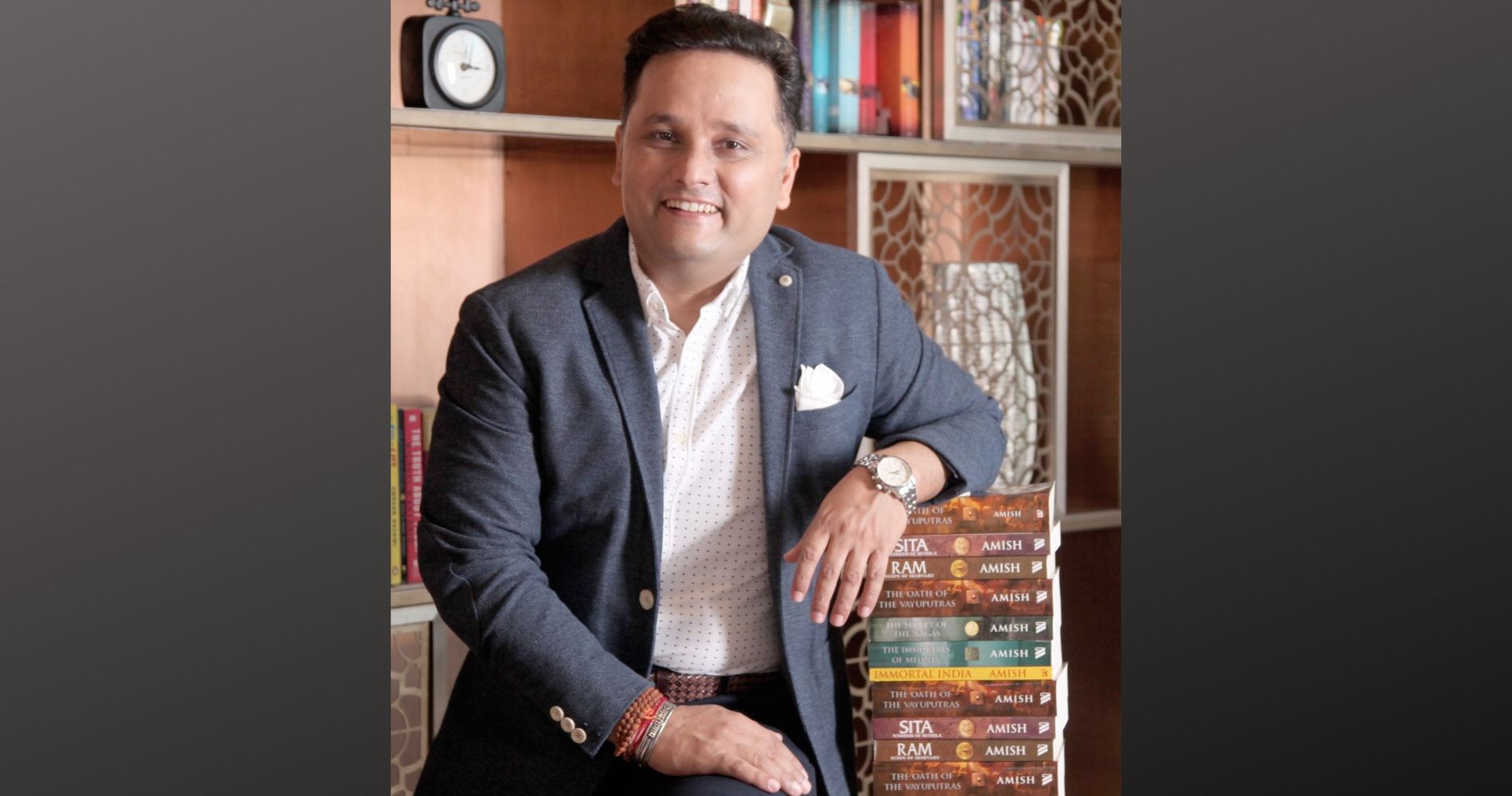 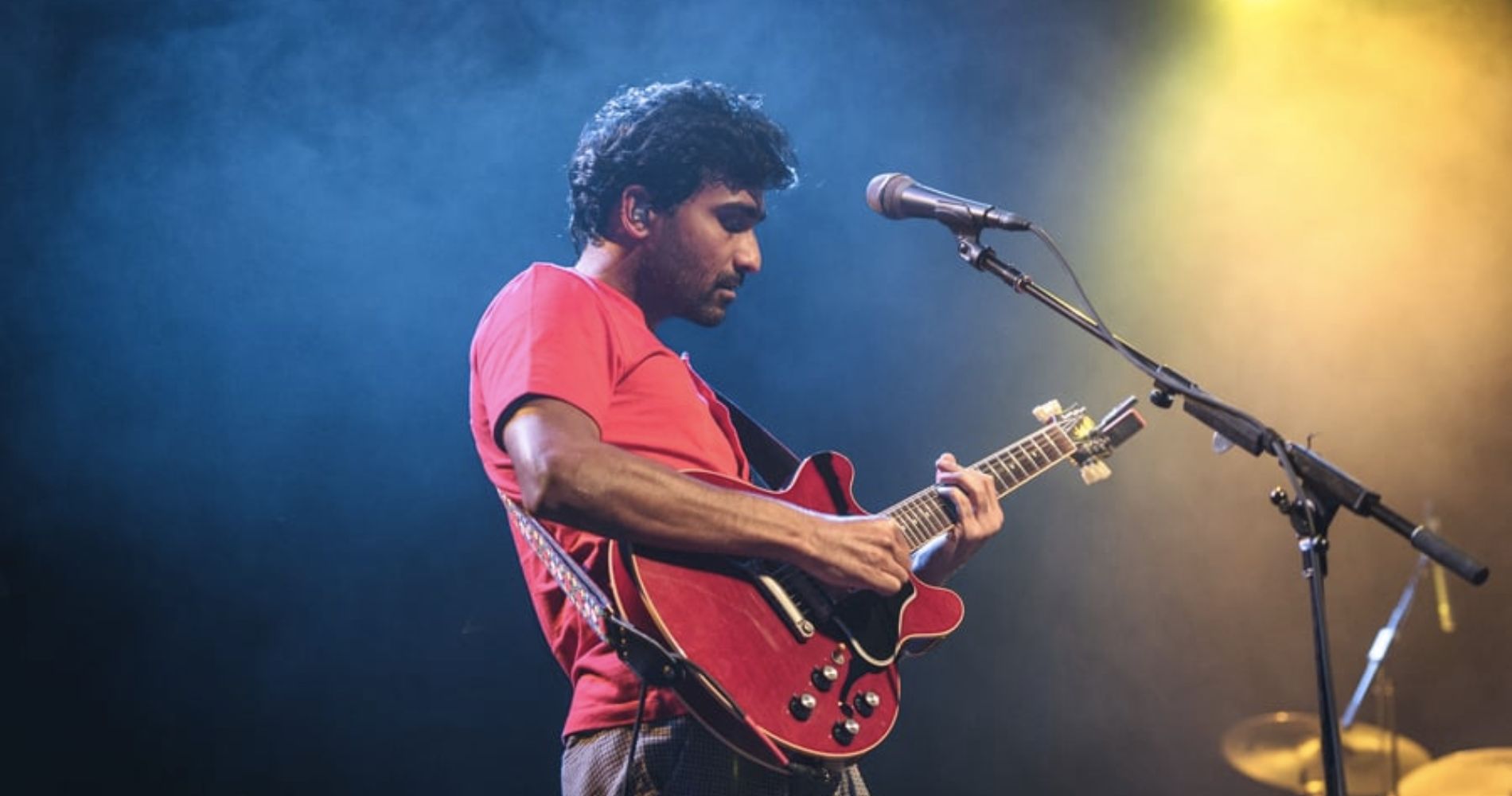 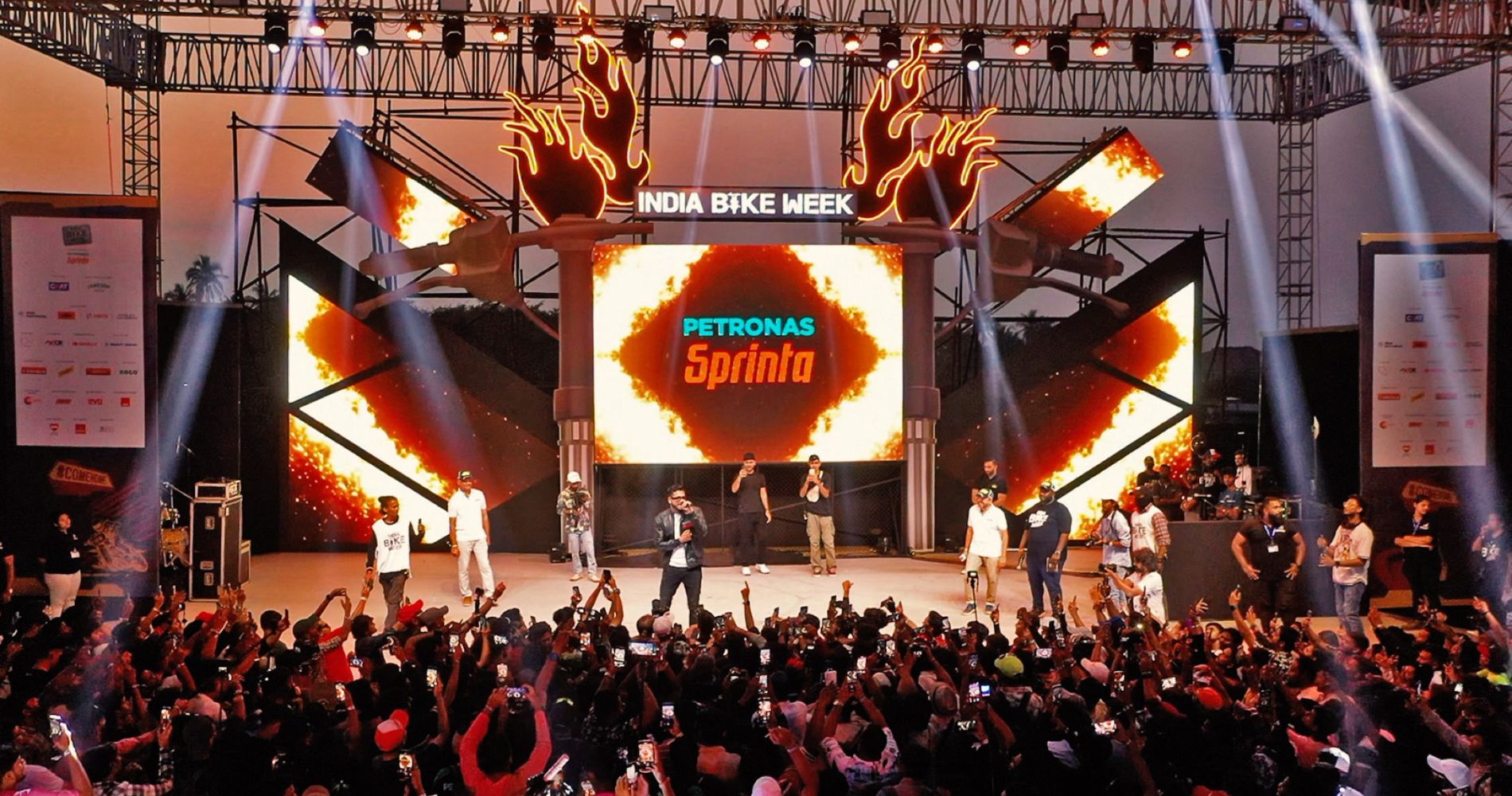 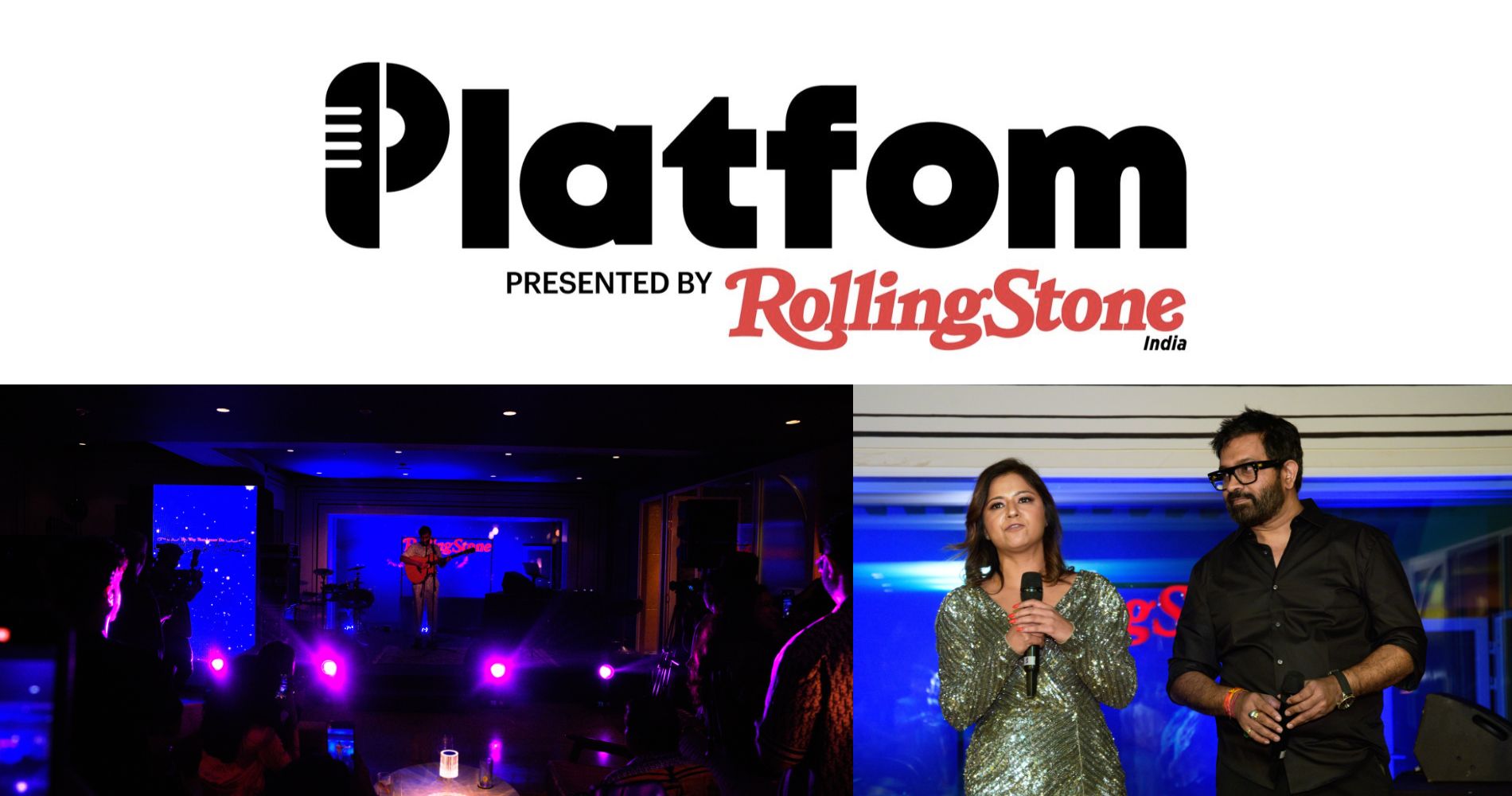